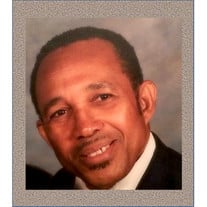 Alvin Trevor Hewitt was born on Thursday, March 2nd 1939 in Kingston, Jamaica from his parents Ivan and Therisa Hewitt. He was blessed and fortunate to have three brothers and five sisters in which he was the 7th child. From his childhood to mid-teens, Alvin attended East Branch Catholic School, now Holy Family School, where he later graduated at the age of 16. Alvin's school life, at a Christian school, led him to accept Jesus Christ as his personal Lord and Savior and to live a Christian Life; his overall thoughts and actions were governed by Christian tenets. As a youngster, Alvin was very friendly and quiet. He had great respect for people in general and always tried to live a peaceful life with his family and friends. He was extremely neat, clean, organized, and always conducted himself within the scope of society's rules and regulations. He was also known for his polite and gentle mannerisms. With all these brilliant qualities, Alvin was not the kind of person you could easily push around; he strongly defended his views and principles, and as a practical man, if he discovered that his views were not fully correct, he would modify them with humility; he was indeed a humble man. After leaving school in 1957, Alvin was employed by Kelly's Plant as an apprentice welder and was quickly promoted to a supervisor's position. That same year, he met Phyllis Rodway who later became his wife and were married for over fifty years. From that union came three children, Everton, Jacqueline, and Sandra Hewitt. From 1958 to 1975, Alvin worked on two cargo ships as the Chief Engineer and completed a program at CAST Technical College in Merchant Marine Engineering. He was very much loved and adored by all his employees, and they attested that he was the best boss they ever had in their lives. In July 1975, Alvin relocated to Brooklyn, New York with his entire family and was gainfully employed by Hexagon Laboratory and Bio Botanical as the Director of Engineering. While in New York, Alvin became an active member in the Methodist Church and served in many positions. He was a strong advocate for education and ensured that his children received a Good education. He was an excellent cook and loved to dance in a special way as if he was riding a motor bike. He loved his cars and was always fixing and upgrading things around his house; working was definitely his passion. In March 2004, immediately after his 65th birthday, Alvin retired and relocated to Miramar, FL with his entire family; this was his greatest dream that came through. His years in Florida was one of the best periods in his life as he proudly enjoyed the fruits of his labor and loved his wife with the love of perfection. His children and grand-children were his pride and joy, and along with the other accomplishments in his life, he felt that he got all he wanted out of life: yes, he had total satisfaction. Continuing with his Christian commitment, he became a member of the Methodist Church in Miramar, where he served as an usher. Sadly, in late 2010, Alvin was diagnosed with the onset of Alzheimer, and his mental health gradually declined. During his sickness, his wife, Phyllis, took care of him as if he was a King until his passing on Thursday, January 30, 2014 at his home in her presence along with his children at his bed side: he died as a Christian in Jesus Christ. Our love for Alvin Trevor Hewitt and his love for us will continue to live forever. As he rests in blessed perfect peace, may God's Perpetual Light shine on his soul until he is awakened by the trumpets of the angels to join his Lord and Savior Jesus Christ, eternally, in heaven, the New Jerusalem. Left to mourn his death is his darling wife Phyllis, his children, grand-children, great-grand-children, his brother, sisters, nephews, nieces, cousins, in-laws, and a multitude of friends.

Alvin Trevor Hewitt was born on Thursday, March 2nd 1939 in Kingston, Jamaica from his parents Ivan and Therisa Hewitt. He was blessed and fortunate to have three brothers and five sisters in which he was the 7th child. From his childhood... View Obituary & Service Information

The family of Alvin Hewitt created this Life Tributes page to make it easy to share your memories.

Send flowers to the Hewitt family.