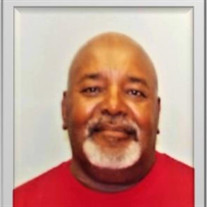 Never say I gave up, say that I gave in; Never say I lost the battle, for its God’s war to lose or win…. A new sunrise came on the arising on October 13, 1952. This day in Richmond, Georgia was never the same when Calvin Thurmond blessed this earth. From birth to his teenage years his mother, Ann Murray, and his grandmother, Frankie Lee Douse, knew he was destined to make an impression in the world and everyone that met him. Calvin attended Phillis Wheatley Elementary and graduated from Miami Jackson High School in 1971. He immediately entered Miami-Dade Junior College. Calvin’s dedication and focus allowed him to graduate with honors with an Associates of Science in Hotel Management degree. In the 1972, he received the Howard Johnson Hotel Scholarship. He was studying to get his aviation mechanic’s license. Calvin had many interests but the one that he was most passionate about was self-defense in mix martial arts. He excelled in the karate style, Nisei Goni Ryu, under Hashi Herbie Thompson self-defense school. In 1976, Calvin enlisted in the United States Air where he diligently ranked as a Staff Sergeant. During that time, Calvin made many friends along the way and met his first late wife Hyacinth Allen. In 2014, Calvin’s life became even more enriched and joyous when he married his lovely wife, Lisa. Life had many new happenings for both. Caring for each other and making each laugh was the greatest gift that they shared. Calvin will be deeply missed in every possible way. Lasting impression…. Calvin made an impression and engraved that love in everyone’s heart that met him. Calvin had so much charm and charisma, which only surpassed by the size of his heart. His energy, mischief, kindness, and zest for life is what his friends and family will remember the most. Calvin leaves precious memories behind with those who love and miss him dearly; his loving wife Lisa Thurmond; mother, Ann Murray, Miami, Florida; stepdaughter, Nikkoll Boatwright, Miramar, Florida ; step-granddaughter, Ariella Andrade, Miramar, Florida; aunts, Dorothy Rosier, Miami Gardens, Florida, Juanita Allie Smith (John), Reading, Pennsylvania, Eloise Calloway (William), Reading, Pennsylvania and Louise Douse, Augusta, Ga.; a spiritual brother, Johnathan Graham; a host of sorrowing cousins and friends

Never say I gave up, say that I gave in; Never say I lost the battle, for its God&#8217;s war to lose or win&#8230;. A new sunrise came on the arising on October 13, 1952. This day in Richmond, Georgia was never the same when Calvin Thurmond... View Obituary & Service Information

The family of Calvin Lamar Thurmond created this Life Tributes page to make it easy to share your memories.

Send flowers to the Thurmond family.