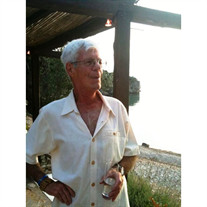 Clive Whittall died in Jackson South hospital in Miami, on Sunday morning the 8th of March. 2015. This was totally unexpected. A week before he underwent an 11 hour operation with 4 world class surgeons, extracting and repairing his radio OSTEO... View Obituary & Service Information

The family of Clive Whittall created this Life Tributes page to make it easy to share your memories.

Send flowers to the Whittall family.