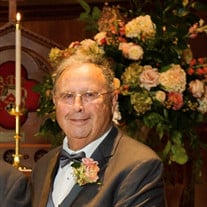 Fredric Leslie Cooper, 86, passed away on November 17, 2021, in Tamarac, Florida. After months of failing health, he died peacefully in his sleep. Fred was born to Solomon and Jean Cooper on November 8, 1935, and spent his childhood in the Bronx, New York. He worked to put himself through college, earning his Bachelor of Business Administration from The City College of New York, and later his Master of Business Administration from Baruch College. Fred became a Certified Public Accountant and worked for many years as a Chief Financial Officer and Corporate Controller. He later transitioned to helping private clients with tax matters and was dedicated to serving several of them up until his passing. On August 16, 1964, he married Marcia Epstein and they moved to Long Island, where they had two children, Julie and Seth. Fred had a lifelong love of learning. Long after retirement, he enjoyed studying a wide range of subject matter – from Classical Music to Literature and Mathematics – through his Great Courses collections on DVD. He was an avid backyard gardener and loved cooking with the vegetables he grew. He was especially fond of any excuse to cook a holiday meal, which he always paired with a glass of bourbon on the rocks. When his children were young, he would put them on step stools in the kitchen so he could teach them how to make soups, sauces, and breakfast dishes. As they got older, he loved spending spring and summer nights at the Jones Beach boardwalk or Eisenhower Park. He would load his car up with the kids and their friends for bike rides until the park closed, then take them to Friendly’s for ice cream. Often, neighborhood friends showed up at the house after dinner, asking “are we going to the park tonight?” Fostering his children’s interest in nature and animals, Fred made the Bronx Zoo and New York Aquarium yearly stops for the family. He was known to take in, feed, and rehabilitate stray animals, regardless of the financial burden. As a result, the house was usually filled with pet dogs, cats, fish, hamsters, and rabbits. His most beloved dog, a golden retriever named Farfel, was his faithful companion for many years. And when Seth left for college, Fred happily took over the care of his snakes and tortoise! Fred was known for his sense of humor, and he could strike up a conversation with anyone. He took classes in languages such as Portuguese and Yiddish and had fun practicing with people he met along the way. On Saturdays in New York, he liked stopping by the local bank to sing old standards with the lobby pianist, to the delight of everyone in earshot. He even took requests! Before moving to Florida, he lived with his son and daughter-in-law in the Baltimore area, where he was a member of the Jewish Community Center and went swimming almost every day. Fred is survived by his children, Julie Beth Cooper of Owings Mills, MD, Seth Cooper (Rebecca) of Sykesville, MD; grandchildren Brooks Jesada, Grayson Leigh, and Elizabeth Anne of Sykesville, MD; and beloved extended family. He is preceded in death by his wife, Marcia Cooper, and his brother, Howard Cooper. A private service will be held in Florida, followed by inurnment at Wellwood Cemetery of West Babylon, New York. A memorial is being planned for January in the Baltimore area. Details are forthcoming. In lieu of flowers, donations in Fred’s honor may be made to the North Shore Animal League at animalleague.org/tribute (the link for memorial donations can be found at the bottom of the web page).

Fredric Leslie Cooper, 86, passed away on November 17, 2021, in Tamarac, Florida. After months of failing health, he died peacefully in his sleep. Fred was born to Solomon and Jean Cooper on November 8, 1935, and spent his childhood... View Obituary & Service Information

The family of Fredric L Cooper created this Life Tributes page to make it easy to share your memories.

Send flowers to the Cooper family.