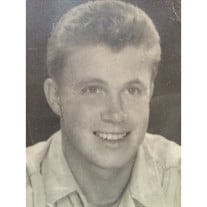 George Wittman Hibbs was born on July 2, 1919 to Mable and George Hibbs in Chicago, Illinois. George would be part of a large family. He was one of eight children. He had two brothers, Bobby and Harry, and five sisters, Alice, Mickey, Betty, Florence and Barbara Jean. George loved to roller skate at the Madison Garden Roller Rink in Chicago. One day while roller skating he happened to notice this beautiful girl. He knew he had to ask her to skate with him. The beautiful girl was Rose Griffin. That day would mark the beginning of a lifetime together for George and Rose. George enjoyed competing in roller skating races, playing baseball, going to movies and dancing at the Paradise Ballroom with Rose. He always enjoyed surprising Rose, including his decision to propose to her. They were married on April 27, 1940. In October 1942, Rose delivered their bundle of joy, a son, whom they would name after his father. Two short months later, George entered the military to serve his country in the United States Army and was deployed overseas. George sent many letters and photographs to his wife during his time overseas and expressed how much he loved and missed her and their baby son. Following three years of service without leave, George was honorably discharged in November 1945. Upon returning home, George went to work for the General Outdoor Advertising Company hanging and posting billboards. George and Rose rented a home in the city directly behind a home rented by Rose's parents in order to be close to family. In 1955, George and Rose purchased a new home in the nearby suburb of Northlake that they shared with Rose's parents. George took a position as a maintenance night foreman at nearby Glenbard High School. On the weekends, George and Rose enjoyed welcoming family and friends into their home to play cards and sing. George and Rose resided in their home in Northlake for over 50 years and created many happy memories there. However, in 2007, they left Northlake and moved to a senior living condominium in Crest Hill, Illinois. As their son, George, resided out of state, George and Rose were thrilled that their new home would be much closer to their grandson, Joe, and his family which would enable all of them to spend more time together. Joe and his wife, Kinga, attended to many of George and Rose's needs and brought much joy to both of them. In early 2012, George and Rose were both in failing health and agreed to relocate to Florida to reside with their son and his partner. George and Rose arrived at O'Hare International Airport for their first flight in over 25 years! They lovingly held hands as they sat in their respective wheelchairs and made their way to the terminal gate. George and Rose were enjoying this latest chapter of their lives and living with their son. They enjoyed watching TV and eating home-cooked meals, and would engage in good-natured bickering and complaining at, and about, each other, followed by hearty laughs and expressions of love for one another. But, this latest chapter of their lives would be cut short by dual diagnoses of cancer. After more than 72 years of marriage, in February 2013, Rose entered eternal life. George's dementia would be a blessing of sorts as he would often forget that Rose had passed and thought she was just gone for the day. George and Rose were surrounded by folks that loved and cared for them. In addition to family, they had wonderful caregivers through a private caregiver organization who showed them love and treated them with dignity and respect. In addition to other caregivers, George and Rose were particularly appreciative of Clare, Cam, Jackie, Monique and Jasmine. They were also thankful for the doctors, nurses, aides, social workers and other staff from Vitas Hospice who provided excellent care, comfort and support. In July 2015, George moved to the Alexander Nininger State Veterans' Nursing Home where he has surrounded by other veterans. George was always proud of his military service and, if he had the presence of mind, would have appreciated the staff at Nininger who honor and care for our veterans. George left this world, to be with his loving wife of 72 years, on September 1, 2015 at approximately 1:30 pm at the age of 96 years old. George and Rose will be interred next to one another at the Glen Oaks Cemetery in Hillside, Illinois. A graveside service followed by a celebration of life and luncheon will take place in October. Please contact the family for details. George is survived by his beloved son George D. Hibbs and his life partner and husband, George R. De Heer; cherished grandchildren, Joseph (Kinga, nee Czapka) Hibbs and Zachary Newman, great grandchildren, Michael (Angie, nee Fato) Glos and Apolonia Hibbs, and great, great granddaughter Natalia Glos; beloved sister, Barbara Scalfaro; and beloved former daughter-in-law Marilyn Boinski. The family suggests donations to your favorite charity or veterans' organization in honor of George, if you are so inclined, but requests no flowers please.

George Wittman Hibbs was born on July 2, 1919 to Mable and George Hibbs in Chicago, Illinois. George would be part of a large family. He was one of eight children. He had two brothers, Bobby and Harry, and five sisters, Alice, Mickey, Betty,... View Obituary & Service Information

The family of George W Hibbs created this Life Tributes page to make it easy to share your memories.

Send flowers to the Hibbs family.