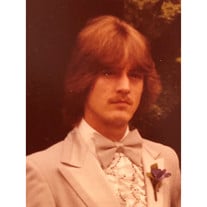 John Fredrick Roberson passed away at the V.A Medical Center in Miami Florida on Wednesday, June 19, 2020. He was a longtime resident of Marathon Key, Florida. He was born on March 30, 1960 in Springfield, Massachusetts. He was one of eight children born to Fredrick Tyrone Roberson and Margaret Ellen (Recor) Roberson, Mroczek He is survived by his siblings Jeanne Vicario her husband Robert of Narragansett, RI, and brothers Anthony Roberson. his wife Pat of Port Saint Lucie, Florida, Fredrick Roberson Jr. and his wife Alice of Springfield, MA, Dale Roberson and companion Sue of Chicopee, MA, James Roberson of Chicopee Ma, Paul Roberson and companion of Chicopee and MA and Edward Boisvert Jr. of Chicopee MA along with many loving nieces and nephews William Crawford, Heather Marques, Anna Roberson, Ashley Vicario, Nicole Vicario, TJ Roberson. Fred Roberson Jr, Michael Roberson, Christopher Roberson, Sherry Roberson, Bryan Roberson, Emily Roberson, Kayla Roberson, Nicholas Roberson, Mila Jane Roberson and Anthony Allen. Savannah J Vicario, Jevelyn Roberson, Aubre Roberson, Chrissy Roberson, Leo Roberson, Jaxon Roberson, Rilee Roberson, and his Uncle John Recor, Aunt Nora Morales, Valerie Lind and many cousins and friends. He is preceded in death by his mother Margaret Ellen Roberson Morczek and his father Fredrick Tyrone Roberson. He served his country in the United States Army and was honorably discharged. He spent most of his life in the Florida, keys, the place he loved the most. He was a kind, simple, wonderful human being. He had a great sense of humor, was a loving family member and a loyal friend to many. Our hearts are heavy to have lost him far too soon. He will be greatly missed by all. Rest in peace our beloved brother and friend. In lieu of flowers https://www.facebook.com/donate/259957178647051/?fundraiser_source=external_url

John Fredrick Roberson passed away at the V.A Medical Center in Miami Florida on Wednesday, June 19, 2020. He was a longtime resident of Marathon Key, Florida. He was born on March 30, 1960 in Springfield, Massachusetts. He was one of eight... View Obituary & Service Information

The family of John Roberson created this Life Tributes page to make it easy to share your memories.

John Fredrick Roberson passed away at the V.A Medical Center...

Send flowers to the Roberson family.