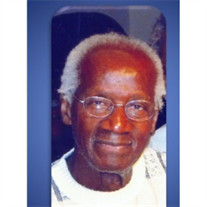 Though his smile is gone forever and his hand we cannot touch; still we have so many memories of the one we love so much. His memory is our keepsake with which we will never part; God has him in His keeping, We have him in our hearts." Eulogy Joseph Andrew Charles was born on May 12th, 1918 in San Pedro de Macoris of the Dominican Republic, W.I. He was the son of Israel Charles and Wilhelmina Charles natives of Antigua W.I. where he later grew up from the age of 5 years old. He loved fishing with his father who was a fisherman and he enjoyed eating portions of his catch. He was also a great swimmer. At the youthful age of 23 he met and married Wilma A Horsford who was a faithful, frugal and industrious woman who loved the Lord Jesus Christ and made Him the center of her life. This was the stabilizing foundation in their lives. To them were born 5 children: Eunolda C Charles, Eustace A Charles and daughter-in-law Jacqueline Charles, Veronica C Haughton and son-in-law Rudyard Haughton, Maurice N Charles (deceased), and Dr. Avril M Sampson and son-in-law Wesley Sampson. He also had daughters Celestina Phillip and son-in-law Ted Phillip residing in the United Kingdom and Dellie Williams (deceased). He was of humble beginnings and became a very resourceful man. His parents owned a bakery and so he built his own oven and made his own bread pans from tin and was able to provide lovely loaves of bread for family and friends. He was always a very generous person with a quick and clever wit. He was never afraid of his responsibilities as provider. When it became difficult to sustain his family he migrated to the island of Trinidad for viable employment in 1951, where he worked with Pan American World Airways and Varig Airlines as a Pastry Chef. He was also a member of The Culinary Arts Society of Trinidad & Tobago, and was commissioned in 1962 to design and decorate the commemorative cake with the Island's coat of arms for their Independence celebration. When he got settled he brought his wife and children to be with him there. There he with the help of faithful friends built a second home for the family. He later migrated with his family to the United States. He has also done some traveling to Brazil, London France, Finland, Germany and other states in the US. While residing in New York, he worked for the Marriott Corporation at JFK as a pastry chef where he retired after over 30 years of service. In addition to his culinary skills, he was also an avid gardener, and was able to provide a lot of food for both family and friends. He used to cultivate vegetable and fruit gardens in Brooklyn, where he was featured on the local TV news station, and in the newspaper for his gardening expertise. He loved to read and instilled the need of having a good education in all his children. He also taught his children to have the kind of resourcefulness, industry, and frugality with contentment that his wife demonstrated in their home. His first wife died in 1995. He leaves behind his 2nd wife Eggenetta Peyton, his step-son Larry Peyton and his wife Nita Peyton. From that blended family he has a step granddaughter and six brothers-in-law, eight sisters-in-law and numerous other in-law families. He is the last of his siblings of brothers and 1 sister. He had the privilege of knowing several generations. He is survived by five children, twenty-two grandchildren, thirty-nine great-grands, four great great-grands and two great great great-grands. He is also survived by several nieces and nephews other relatives and many church family and friends which includes Lise Pidoux, thanks for your faithful devotions over the years. He believed in the Lord Jesus Christ and was devoted to literature distribution. He usually carried Steps to Christ in his car to give to whomever the Lord impressed on him to give. Although he was not able to stand for long periods of time, he was always there with the group giving out bread to those in need. Indeed he was one resilient person who always wanted to honor the Lord in all he did as best as he could. He will be greatly missed as he sleeps in peace until Jesus comes. Friends desiring to contribute in Patricia's memory are to donate to OVERTOWN YOUTH CENTER INC. The family preferred charities are listed under the donation tab. For more information call 954-639-7451

Though his smile is gone forever and his hand we cannot touch; still we have so many memories of the one we love so much. His memory is our keepsake with which we will never part; God has him in His keeping, We have him in our hearts." Eulogy Joseph... View Obituary & Service Information

The family of Joseph A Charles created this Life Tributes page to make it easy to share your memories.

Though his smile is gone forever and his hand we cannot touch;...

Send flowers to the Charles family.