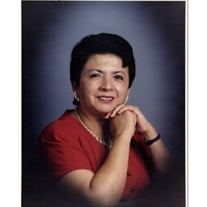 Marina Mayorga was born Marina Toro in the town of Fresno, Tolima, Colombia on September 30th, 1943. At the age of 5, her family moved to Honda where she developed one of her lifelong hobbies and interests: cooking. Her mother nurtured her fascination by asking her to help in the kitchen where she absorbed the flavor of her mother's delectable cuisine. Marina had a complex palate that showed in everything she concocted. From a young age, she was detail-oriented and highly organized, diligent and focused. She strived for perfection and set a high bar in every aspect of life. With her strong personality, she was no push over. Silverio Mayorga learned this early when he met his future wife. When he was 16 and she was nearly 15, he walked into her home In Bogota (where she moved to in 1958) and she invited him to stay to enjoy delicious beans she had just prepared. He couldn't refuse the invitation and that was only the beginning. He courted her and asked for her partnership and not too long after asked for her hand in marriage. As a young couple, they formed a family giving birth to Martha in 1961 and Rafael in 1962. Marina and Silverio worked hard to support their family. In 1970, Silverio and Marina made the decision to move their family to New York to seek better opportunities for their children. They wanted to build a future where their children could succeed and use their God given talents. Silverio moved first, spending 9 months by himself in Brooklyn until he could save and create a foundation for Marina, Martha who was 9 and Rafael who was 7 to join him. The reunion occurred later that year in October when the beginning of fulfilling their American dream began. In New York, Marina sewed for a living, another passion and talent she enjoyed. But, she wasn't satisfied with just that job. She sought to achieve much more. The expectations she set for her children to study and succeed was not just instruction for them, she led by example. In 1973, the family moved to Arlington, Virginia where she began taking computer processing classes which prepared her for an administrative position at a local company. But, still, that was not enough. Convinced by a friend that she would be perfect for a position in the federal government, she set out to prepare herself to be successful there. She took courses in accounting leading her to land a position as an accounting tech with FDIC, the company where she grew in her career for 25 years. Throughout those 25 years of building a solid and successful career, she raised two strong children who would also strive to achieve their individual dreams. In 1988, she saw her eldest child, Martha, graduate from medical school, the first doctor and top level professional in the family. She also saw her son Rafael through his education and took a central role in helping to raise his daughter, her first grandchild Jessica. Through this all, she instilled in her children a sense of responsibility, hard work and most of all, unbreakable family bonds. She became the backbone of the family, the matriarch. Over the next several years she would nurture and guide her grandchildren who then included Nicole, Ryan, Brandon, Natalie, Amanda and Nathanael. She not only played valuable roles in the lives of her children, grandchildren and great grandchild Jax, but she gave her heart, time and care to three other women who would come to be like daughters to her: three of Silverio's sisters Carmen, Rosa and Lucero who moved from Colombia to the United States in July of 1978. She pushed them to achieve their education and supported each of them through the following phases of their lives: marriage, building successful careers and caring for their children. Most of all, she welcomed Lucero into her home and, with Martha and Rafael raised her as her own. This third daughter would come to know Martha and Rafael as her siblings and would go on to complete higher education and pursue her professional and personal dreams. With time, Marina and Silverio were fortunate to live out another dream of theirs: traveling the world. There are few countries they didn't make it to having navigated most nations in South America, the Caribbean, Europe, Asia and much more. They experienced and treasured diverse cultures and made the globe their classroom to become some of the most worldly people one could ever meet. Marina had a wide network of loyal friends. How could she not? She was personable, delightful and beautiful inside and out. She was stern and honest, but her heart was warm and limitless. She shaped the lives of many and taught her family the importance of being relentless, tenacious and strong but she also taught humility, friendship and everlasting love. This matriarch, in many ways will continue to be the backbone of her family and an inspiration to all whose lives she touched. Her family is committed to carrying the torch of her legacy which shall never be extinguished. Friends desiring to contribute in Marina's memory are to donate to AMERICAN CANCER SOCIETY INC and ST JUDE CHILDREN RESEARCH HOSPITAL. The family preferred charities are listed under the donation tab. For more information call 954-639-7451

Marina Mayorga was born Marina Toro in the town of Fresno, Tolima, Colombia on September 30th, 1943. At the age of 5, her family moved to Honda where she developed one of her lifelong hobbies and interests: cooking. Her mother nurtured her fascination... View Obituary & Service Information

The family of Marina Mayorga created this Life Tributes page to make it easy to share your memories.

Marina Mayorga was born Marina Toro in the town of Fresno, Tolima,...

Send flowers to the Mayorga family.