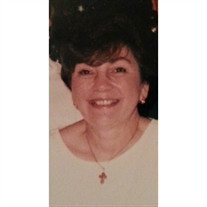 Maureen M. MacKrell passed away on December 20, 2014 in Boca Raton, FL. Maureen was born in Jersey City, NJ on October 19, 1943 to Mary and the late Russell Engle. She was a graduate of Brick High School; Brick NJ. Maureen lived in Carbondale,... View Obituary & Service Information

The family of Maureen Mackrell created this Life Tributes page to make it easy to share your memories.

Send flowers to the Mackrell family.