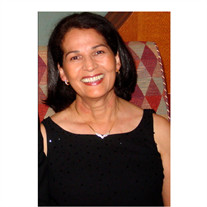 Omaira's life story began a few weeks before Christmas in December of 1946 in Cali, Colombia. Born to humble parents, Don Jaime Rodriguez and Doña Lucila Saucedo, she was the first-born of their six children. Her father Don Jaime was a shoemaker who practiced his craft at home hiring temporary workers who cut and shaped fine leather into handmade children's shoes. The Rodriguez-Saucedo home was always filled with people, laughter and the smells of food from Doña Lucila's kitchen. No person ever left without eating and sharing the love that abounded here. The music from Don Jaime's guitar would spice their simple but happy existence. Omaira took on responsibility at the early age of five helping her mother make the morning breakfast, do the washing and cleaning as well as care for her younger siblings. During these early years Don Jaime would be traveling from pueblo to pueblo delivering his shoe orders and taking new ones. She would often say she was happy to see her father return as he always brought home something and the children knew that he would bring a special treat. Although Omaira was raised in a strict environment she was a happy child as her home was always filled with her friends and the friends of her brothers and sisters. Don Jaime's guitar bridged the generation gap and the Rodriguez-Saucedo home became a magnet that welcomed all in the neighborhood. Omaira was the first of the six siblings to complete a university degree. Her brothers and sisters would follow also completing university degrees and go on to practice professional careers. In the late '70s she traveled to Puerto Rico to begin a Master's Degree study program at the University of Puerto Rico. She was fortunate to meet another loving family like her own from whom she rented a room. The lady of the home was Doña Elena, an expert seamstress who shared her love for the art of sewing, embroidery and handmade lace. Omaira learned how to make beautiful articles of clothing while pursuing her studies and received a little money from the sewing work. She would later make her children beautiful one of kind clothes. After receiving her Master's Degree she began to teach Organic Chemistry at the University of Puerto Rico and later also at Sacred Heart University. She enrolled in a conversational English program at an adult education center where her teacher, Nick Kontax, would become her future husband. Married in 1982, Omaira and Nick started a simple life together. Nick left his teaching job that paid little and was hired as a property manager. In 1984 their first child, Carla was born. A year later found the family of three moving to Miami, Florida. Nick found employment as an adult education teacher as well as a night auditor at a resort. On weekends they would travel to nurseries to pick up plants for Omaira to sell at the side of the road in Carol City where they would live for the next five years. All through this Omaira never complained that her degree was being wasted and was happy to meet people. This as well as a subsequent job in customer service improved her English. Their second child Nicholas Jr. was born in 1986. During this time Nick enrolled in a Master's Degree program while still maintaining a full time evening job and it was Omaira who kept the family together. The Kontax family situation improved with Nick's graduation and their last child Jennifer was born in 1989. A year later they would move into and own their first home. Omaira later enrolled in a Medical Lab Technician program and would graduate and become a Licensed Medical Technologist, a profession she would practice the rest of her life. She was diagnosed with a very aggressive form of cancer in the later part of 2012. Throughout all of the surgeries, chemo, and multiple ups and downs she faced life head on. Amazingly, she continued to work throughout all of this time and be an inspiration to others who faced similar devastating obstacles. Omaira was very close to her mother, father and siblings. In the later years with much sacrifice she bought them a home in Colombia. She was a loving mother and spouse and her children reflect the values of perseverance, sacrifice, charity, honesty and love of knowledge that she imparted. She was there for every school function, dance and music recital and celebrated their achievements and comforted their sadness. She ushered them through all of their formative education. Even later with her children completing postgraduate professional studies she maintained contact with them on an almost daily basis. She never forgot whom she was, from where she came and that her faith in God bestowed thousands of blessings on all whose lives she touched and were in turn touched by her. In loving memory, Nicholas Kontax

Omaira's life story began a few weeks before Christmas in December of 1946 in Cali, Colombia. Born to humble parents, Don Jaime Rodriguez and Doña Lucila Saucedo, she was the first-born of their six children. Her father Don Jaime was a shoemaker... View Obituary & Service Information

The family of Omaira Kontax created this Life Tributes page to make it easy to share your memories.

Send flowers to the Kontax family.