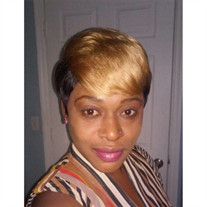 Rodline Cadet was born August 15, 1976 in a small town located North side of Haiti called Dondon. Both, her mother named Yvonne Lamoure and her late father Joseph Robeanst Cadet are from Dondon. She was known by everyone as Roro. When Roro was 3 months old her mother left her with her maternal grandmother. A couple weeks later her paternal grandmother went to visit her and she decided to take care of her. Roro spent most of childhood living with her paternal family members. She was always cheerful, willing to help others as needed. Going to school, she used to be the one to start the jokes. When she was a teenager she moved to the United States, she lived with her late father, her stepmother and her siblings. She attained Miami central High School. At age of 21, she gave birth to her 1st born Shaheed Omar Cadet, a year later she met her husband Dieulo Jeanty. In 1998, she gave birth to her second son Roderick Jeanty and in 2000 she gave birth to her only daughter. They were best friends. Roro was always about pleasing the children; she spoiled all the small children in the family. Roro was the crazy one but no one could stay mad at her for too long. She always told everyone you were her favorite. Roro had turned her life to God, she enjoyed going to church. Sometimes, she wanted all the attention. Everyone loved her because of who she was. June 2014, this was how it all started. She started feeling pain. Since she was extremely strong she did not go to the hospital right away, but until August 10th, 2014. The Doctor said she had Lupus. She was in and out of the hospital because she could not breathe. On September 26th she could not breathe, her daughter called 911; she was transported to Memorial regional Hospital. On the 29th, they performed a procedure that revealed she had pulmonary fibrosis. The doctor said this was a rare disease and hers was very aggressive. While everyone came to visit, she was still cracking jokes and taking pictures of the kids. She was always surrounded by family members from all ages. On October 9th, she was in the ICU and while she was there, she requested for a lot of prayers. Her biggest worry was her children. She told several family members to watch after the kids. On Monday, October 13, 2014 due to the breathing problem, she was in life support. The family members were always at her bedside 24/7. Her husband slept with her every night while in the hospital. On Tuesday October 28, 2014 in the afternoon, Roro journey came to an end. The Almighty father and her past relatives called her to start a new life. As we celebrate the new beginning of her life let's not forgot about her children. Let's not make today the last day we are there for them, let's make it a long journey. May you rest in peace Roro. You will always be and will live in our hearts.

Rodline Cadet was born August 15, 1976 in a small town located North side of Haiti called Dondon. Both, her mother named Yvonne Lamoure and her late father Joseph Robeanst Cadet are from Dondon. She was known by everyone as Roro. When Roro was... View Obituary & Service Information

The family of Rodline Jeanty Cadet created this Life Tributes page to make it easy to share your memories.

Send flowers to the Cadet family.