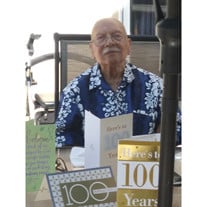 Vivian James Campbell passed away on October 21, 2018, at the age of 100 at his home in Miramar, Florida. Vivian James Campbell was born to the late Malcolm and Dozilia Campbell on March 27, 1918 in Grenada, West Indies. He was raised in Grenada with many brothers and sisters. He joined the Merchant Marines in the 1940s, where he spent four years traveling to various countries and eventually ended up in the United States. He lived in New York where he met his late wife Genevieve Myrtle Delevante. They raised their three children, Errol, Deborah, and Lisa. He started his career in New York City as a hotel clerk. He eventually moved his family to Queens, New York. He was employed by the City of New York, where he worked for the Department of Sanitation, retiring after twenty years. After retiring Vivian and Genevieve moved to St. Croix for eight years, then moved to Sarasota Florida where they lived for almost two decades. When Genevieve went home to be with the Lord in 2013, Vivian moved in with Lisa and her family. He eventually celebrated his 100th birthday in March of 2018 with family and friends. He enjoyed gardening, whether growing huge tomatoes and vegetables in Queens, or growing avocado and citrus trees and in Florida. Vivian is survived by his sister Gladys Simon, his son, Errol Campbell, his daughter, Lisa Myrick, his Son-In-Law Donald Myrick and his two grandchildren, Ashley and Justin Myrick, and a host of nieces and nephews.

The family of Vivian James Campbell created this Life Tributes page to make it easy to share your memories.

Send flowers to the Campbell family.