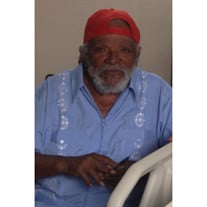 William (Mario) Camacho Ellis, the fifth child blessed to the late Zoilo Mendoza Ellis and Dulce Maria Camacho Benitez Ellis, was born April 7, 1931, in Key West, Florida. He attended school at St. Frances Xavier Catholic School. Although his family was poor, he and his siblings had a happy childhood, often exploring the sites of Key West, including the lighthouse that gave them a bird's eye view of the tiny town. Mario learned the value of hard work early on, doing odd jobs in exchange for a little spending money. Mario was preceded in death by his loving wife Mahalia Ellis and grandson, Miles. William enlisted in the armed forces where he served dutifully in the Airforce from 1949 through 1952. Upon completion of service, he moved to New York for a short period. He later relocated to Miami, Florida to be near his brothers Zoilo and Evelio. In 1966, he met and married the love of his life, Mahalia Cummings. They made their home in the Liberty City area of Miami Dade County where they spent 18 years together until her death in 1984. William retired from the University of Miami (Printing Department) in 1990 after many years of diligent service. William's love poured from his heart to all those with whom he came in contact. His loving spirit and kind-hearted nature were evident in all aspects of his life. He had a smile that would brighten up anyone's day. He loved jazz and had a huge collection of various music. Additionally, he was very knowledgable about the music and artists. He also introduced "Fee" to the art of jazz and various musical instruments. William was self-taught, gifted, and very crafty with his hands. He built his first boat (with his daughter Felicia "Fee") using a blueprint taken from a magazine. The boat was completed and sailed in the waters of Virgina Key Beach. He leaves many fond and loving memories with his daughter Felicia Ethridge of Miami, 5 grand children: Barole, Bernard, Felicia, Jasmine and Claudia. 5 great grandchildren: Jah'Cari, Anessa, Courtney, Brooke, MariElla, nieces Yunice and Michelle Cummings; a host of nieces, nephews, cousins, and other relatives and; a very dear friend Clara Gordon. "I shall not pass this way again, Through this toilsome world, alas! Once and only once I pass, If a kindness I may show, If a good deed I may do, to a suffering fellow, let me do it while I can. Not delay, for it is plain, I shall not pass this way again."

The family of William Ellis created this Life Tributes page to make it easy to share your memories.

William (Mario) Camacho Ellis, the fifth child blessed to the...

Send flowers to the Ellis family.