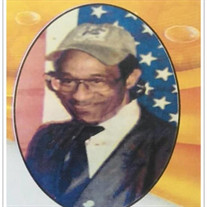 It is with profound sorrow and deepest regret that the family of Willie Harold Green announces the passing of our loved one on Wednesday, November 24, 2021, in Miami, Florida. Willie was born in Miami, Florida on October 5, 1940. After graduating from Booker T. Washington Junior-Senior High as salutatorian, Miami, Florida, Willie enrolled at Morehouse College in 1959. He attended Morehouse in Atlanta, Georgia, for two years. He then entered the United States Army and was honorably discharged after serving three years. With the assistance of the Government (G.I Bill), he then enrolled in University of Miami, and in 1967, earned a Bachelor's Degree in Mathematics. In 1972, he earned a Master's Degree in Mathematics from the University of Miami. Willie taught mathematics at Northwestern Senior High School, Miami, Florida. Afterward, he accepted a computer programmer position with the National Aeronautics and Space Administration (NASA), Cleveland, Ohio, in 1972. He later transferred to the Kennedy Space Center (NASA), Cocoa Beach, Florida, where he continued his work. His main responsibility was in Earth Resources, where he used computers and satellite data to analyze various factors that affect the earth. While residing in Rockledge, Florida, he retired from the Kennedy Space Center in 1984. During his life, Willie’s interests were playing basketball, bowling, and tutoring his daughters in math. His community involvement included Alpha Phi Alpha Fraternity and American Legion Post 29. While residing in Rockledge, he was a member of the St. Paul Baptist Church where he served on the Deacon Board. While living in Miami, he was a member of Greater Bethel AME Church. Willie was the son of the late Marion Green Sr. and Addie Grant. He was preceded in death by one brother and one sister. Willie leaves to mourn daughters Kendra Green and Katrice Galloway; grandchildren Adrice, Kristian and Giovanni Galloway; sisters Jeanette Harvey and Jessie Gary; brothers Marion Green and James Francis Green; a devoted nephew Derek Harvey, and a host of loving family members and friends. **Please be advised** 1) That the family is requesting NO FLOWERS be sent for condolences. 2) That the Honor Guard and Staff at the South Florida National Cemetery are requiring masks be worn by all attendees. A memorial service is being planned for Friday, December 10, 2021 at 9:00AM at the South Florida National Cemetery located at 6501 FL-7, Lake Worth, Florida, 33449. Arrival time is requested at 8:45AM, no earlier than 8:15AM. Upon arrival at the cemetery, please come to Lane #1.

It is with profound sorrow and deepest regret that the family of Willie Harold Green announces the passing of our loved one on Wednesday, November 24, 2021, in Miami, Florida. Willie was born in Miami, Florida on October 5, 1940. After graduating... View Obituary & Service Information

The family of Willie Harold Green created this Life Tributes page to make it easy to share your memories.

It is with profound sorrow and deepest regret that the family...

Send flowers to the Green family.