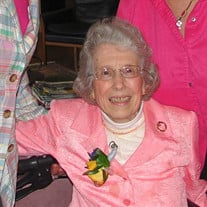 Betty Anne Spruill Gillingham transitioned from this earthly sphere in Davie, Florida on March 9, 2022. She was born in Knoxville, TN to Victor Hugo Spruill and Mabel Alenza McAllister. She wasn’t one to count years, but she mentioned how many times she had traveled around the earth since her birth in 1926. She also enjoyed telling people that she preferred juicy, ripe watermelon to a birthday cake. Betty Anne maintained contact with her two sisters, Martha and Ethelyn, who live in Maryland, and other family and friends via letters and phone calls, often sending poems she composed to celebrate different holidays. Betty Anne trained as an elementary teacher at Towson State College in Maryland and went on to earn a master’s degree from University of Wisconsin. She taught in the early elementary grades in Maryland and Wisconsin before moving to Hawaii. There she met and married her beloved husband, Robert (Bob) Gillingham, Jr. After Bob retired, the couple decided to leave Hawaii to make Knoxville, TN their home. Both were active members of the Knoxville Christian Science church. Betty Anne continued to live in Knoxville after Bob’s passing in 2009, eventually deciding to move to Florida in 2013 for the warmer weather. She left behind many friends in the Knoxville community and at her church, including numerous students from her Sunday School classes. At Daystar, Inc., a Christian Science facility in Davie, FL, she began the next phase of her life. Through the picture window of her apartment at Daystar, she enjoyed the tropical plants and watched a peacock and peahen raise their chicks. She enjoyed walking outside to enjoy the sun. She was always thrilled to receive letters from former students from the elementary schools and Sunday School in which she taught, remarking that these little ones had grown up and now wrote of their children and grandchildren. Betty Anne considered the residents, administrators, nurses and staff at Daystar as special friends and expressed gratitude for the loving, supportive atmosphere in which she lived. Her family requests that any donations made in Betty’s name be given to a charity that she would like, in lieu of flowers. Please visit Betty Anne’s guest book now available at https://www.wilcoxffh.com/obituaries/Betty-Gillingham/

Betty Anne Spruill Gillingham transitioned from this earthly sphere in Davie, Florida on March 9, 2022. She was born in Knoxville, TN to Victor Hugo Spruill and Mabel Alenza McAllister. She wasn&#8217;t one to count years, but she mentioned... View Obituary & Service Information

The family of Betty Anne Spruill Gillingham created this Life Tributes page to make it easy to share your memories.

Send flowers to the Gillingham family.